What's in that fizz?
Researchers from the University of Reims Champagne-Ardenne in France have been conducting serious research into what's in a chaqmpagne bubble. They estimated that an average 75cl bottle of champagne produces 100m bubbles and releases 5 litres of carbon dioxide. With a mass spectrometer, they found "hundreds" of chemical components in bubbles which affect the senses, through taste, odour, colour or feel, and notably either aromatics or the precursors of aromas. 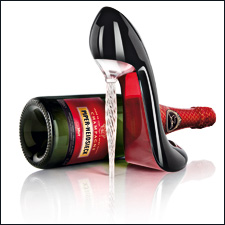 Piper-Heidsieck are collaborating with famed haute couture shoe designer Christian Louboutin, who has created a crystal stiletto heel-shaped âChampagne fluteâ that Piper-Heidsieck is selling, for about â¬500, in a fancy shoebox along with a special Louboutin-edition bottle of Champagne Piper Heidsieck CuvÃ©e Brut. The designer was inspired by the female cabaret dancers of Belle Epoque Paris, who would serve sips of Champagne to gentleman admirers from the inside of their dancing shoes,

Friday 20th - Sunday 22nd November - CHAMPAGNE, XMAS MARKET AND JAZZ WEEKEND
Organized by Friendship Wine Tours, and escorted by Christos Ioannou.
This trip catches the beginning of the Reims Christmas Fair, and the end of the Reims Jazz Festival Visiting 3 Champagne producers. Places are limited, so please let Christos know as soon as possible if you would you are interested - numbers must be finalized by mid October.
Please call Christos on 020-8993-2006 or email christos@criterionwine.com

Underwater wine
You may have heard of the Cavas Submarinas in Chile, where bottles of wine are stored deep under water for a peaceful maturation. A Californian adopted a similar approach to save his precious vintages when his house was threatened by wildfires recently. As the fire closed in on the house in Big Tujunga Canyon, the family was ordered to leave. Bert Voorhees submerged eight cases of wine in his own swimming pool. When he returned after the fires had passed, he found his house and other belongings were gone, but the wine was safe. Voorhees later opened a few of the bottles with some friends and "the wines tasted fine" .

Swine flu and Wine
Churches in central and northern Sweden are making planning to replace the table wine used in the Communion sacrament with higher-alcohol fortified wine. Church officials hope that fortified wine, with its higher percentage of alcohol compared with table wine, will prevent the spread of the swine flu virus via the communal chalice.
A Chicago doctor is trying to make the swine flu vaccination process a little bit more relaxing. Dr. Scott Hanlon is teaming up with the South Loop Wine Cellar for a night of shots and flights. For customers interested in the wine-and-vaccine pairing, $40 buys a swine flu inoculation and a flight of five wines.

Nutrition Factsâ¦ Coming to a Wine Bottle Near You
The US government, through the Treasuryâs Alcohol, Tobacco and Trade Bureau (TTB), is considering proposals that would require wine producers to include the same sort of label information on wine bottles that is required on tomato ketchup and chicken noodle soup. No one is sure exactly when TTB will make a decision (originally scheduled for 2008). What is certain is what TTB has been considering:
â¢ Equivalency measurements; that is, how many servings of beer or cocktails is the same as one glass of wine?
â¢ Ingredient labels, where everythingâfrom egg whites used for fining to grape concentrate added at the end of fermentation to boost sugar levelsâwould be included
â¢ Nutritional information, including calories, fat and carbohydrate content

French wine and spirits exports fell by almost a quarter in the first half of 2009
Champagne sales plummeted by 45% in value with Bordeaux declining 24%, according to the FÃ©dÃ©ration des Exportateurs de Vins and Spiritueux (FEVS). Burgundy exports fell 30%, while CÃ´tes du RhÃ´ne was down 14.3%. The vin de pays category was less badly affected while vin de table grew by 1.2%. Both wine and spirits have been hit by the global economic downturn, with FEVS predicting that exports in 2009 would reach 2004 levels 'at best'. This has been exacerbated by de-stocking in the supply chain, as suppliers slimmed down inventory to increase cash flow.

Can miniature sheep reduce wine's carbon footprint?
Peter Yealands, a New Zealand winemaker believes he has found a novel solution to reducing the carbon footprint of wine. Wine producers often use sheep to keep grass short, but flocks must be removed when the vines bud because the sheep will eat them too. To prevent the grass using up precious nutrients and water, and to prevent the spread of disease and fungus, growers normally use tractors to mow the grass.

To avoid using a tractor, last year Yeaslands experimented by letting loose giant guinea pigs. That worked initially, he said. "But once the hawks had a taste for them they were sitting prey. We were losing them by the hour. Besides, we would have needed 11 million of them to make it work."

The new answer is Miniature sheep. There are only 300 babydoll sheep in the world and they were originally bred as cute miniature pets, and only reach about 60cm tall when fully grown. Because the grapes tend only to start growing from about 110cm off the ground the sheep can't reach them. Yeaslands believes that they could help him to reduce the environmental footprint of his wine. By allowing the babydolls to graze on the grass between his vines, he can dramatically reduce the energy his wine takes to make and ultimately enable the process to be more sustainable.

The Alabama Beverage Control Board has banned Cycles Gladiator wine produced by Hahn Family Wines in Soledad, Calif. The Cycles Gladiator label, a replica of an 1895 French bicycle advertisement, features a fanciful image of a nude woman flying alongside a bike amid a star-filled sky.

The control board had approved the label in previous years, but now even went so far as to ask the winery never to submit the label again "because it's offending people in the office."

The American Approach to appelation - large scale
The USA will soon have the world's largest wine appellation - the 30 thousand square miles Upper Mississippi River Valley AVA. The AVA averages 120 miles from east to west, 225 miles from north to south. It encompasses some or all of ten counties in Minnesota, nine in Illinois, 18 in Iowa, and 23 in Wisconsin. The northern boundary begins near St Paul, Minnesota in the north to Moline, Illinois in the south. This AVA is fifty times greater than Bordeaux.

It contains producers of some repute. The Wollersheim Winery of Prairie du Sac, for example, has earned some 267 medals over the past 20 years. The application for the UMRV AVA was based upon evidence of a glacial retreat 15,000 years ago. The resultant water flows combined with the St Croix River and what became Lake Superior to form this bedrock. Due to the abundance of cold and humidity, French and other hybrids dominate the region.

UK vineyard expanding
UK vineyard area has grown by 45% over the last four years with 1,106 hectares now under vine according to the Department for Environment, Food and Rural Affairs, The number of vineyards has also increased year on year since 2002, with 416 now recorded according to the Wine Standards Branch of the Food Standards Agency.
The extra vines have been mostly planted by or by suppliers of two of the biggest producers, Chapel Down and Nyetimber. Another major new entrant is the supermarket Waitrose, which has started planting Chardonnay, Pinot Noir and Pinot Meunier grapes at its Leckford Estate in Hampshire.

VDP medal awarded to Freddy Price
During the 36th VDP wine show held in Mainz, attended by 3,000 visitors, Freddy Price (a regualar speaker at Charlemagne) was awarded the VDP Herkunft Deutschland ("Origion Germany") medal. The prize is awarded to publicist who rendered an outstanding service to the german wine.
The citation for this award highlighted his work in the wine trade since 1953 and his authoritative book "The Reisling Renaissance".

Parker rates Bordeaux 2008 highly
Robert Parker's scores for Bordeaux 2008 are finally out and he is hugely positive about the vintage:
"The 2008 vintage is dramatically better than I had expected. It had all the qualities that make an excellent and in some cases, a great vintage so special: exceptionally dark opaque colors, gorgeously ripe fruit, stunning purity almost across the board, great freshness, slightly higher acids than normal, and remarkable density as well as concentration ... a number of superb wines are close to, if not equal to the prodigious 2005 or 2000 vintages" - Robert Parker

If it's too good to be true, it probably is.
Next time you pop out to buy some Champagne, steer clear of labels sporting unfamiliar names and bargain price-tags. The names Raymond Vadim, Pierre Plantard and Charles Debussy were on thousands of bottles of bubbly fobbed off as real Champagne to unsuspecting customers by a mafia ring recently dismantled in north Italy. The counterfeiting may have been going on for years, with up to 300,000 bottles exported from France and distributed in Italian grocery stores at around â¬15 a bottle.

Italians to form coalition against EU proposals on blended rosÃ©
RosÃ© producers in Italy have joined forces to fight EU proposals to allow the mixing of red and white wines to make rosÃ©. Two Lake Garda rosÃ© associations â Bardolino and Garda Classico â are working together for the first time since they were created in 1968. The groups hope to attract producers from Apulia and Abruzzo to form a larger Italian coalition to oppose the reforms.
The EU wine reform management committee delayed a vote on the proposed regulations on 27 April until 19 June, after the World Trade Organisation requested more time to scrutinise the proposals.

2004 Grange a 'great, benchmark' wine
The 2004 Penfolds Bin 95 Grange, to be released on May 1, is tipped to be one of the great vintages of Australia's top wine. The pre-release retail price has already reached $600, the highest ever for a new vintage Grange. Penfolds' chief winemaker, Peter Gago, put the wine in the same league as the 'wonderful' 1990 and 1996 vintages.

Not so sweet for Beaujolais producers
Fifty Beaujolais vignerons have been severely fined by French courts in Villefranche-sur-SaÃ´ne for adding excessive sugar to their wines in order to boost alcohol level in fermentation ("chaptalization").

Wine Spectator âBest of 2008â
The authoritative US wine magazine has released its list of the 100 most exciting wines of 2008. Of the top 10, five were from France, with US, Australia, Portugal and Italy also showing. The number 1 spot was taken by 2005 Casa Lapostelle Clos Apalta from Colchagua Valley, Chile.

President Obama celebrates with Prosecco
President Barack Obama celebrated his inauguration with Virginia wine â and Prosecco. At one of many dinners on 19 January, also attended by outgoing president George W Bush and former president Bill Clinton, guests were served two wines from Virginia: Barboursville Vineyards Cabernet Franc Reserve 2006 and Barboursville Vineyards Octagon 2005. They also worked their way through 100 bottles of Italian Prosecco Conegliano Valdobbiadene. Charlemagne members will have their chance to sample several Virginia wines at our June tasting.

Three bottles for the price of two?
Two for the price of one. Forty per cent off this. Five pounds off that. The supermarkets and off-licences offer a dazzling confusion of 'bargains' and 'special offers'. But are they for real?
Read an expose of commercial marketing of wine and the role of the major vendors which keeps the average price of a bottle of wine down to £4.08 - and is it really worth that much?
http://www.guardian.co.uk/food/Story/0,,2050339,00.html